Mirror Mirror on the wall, Who is greenest of them all?

This is a test. Which of these three vehicles do you think was responsible for the most carbon dioxide emissions per year in Alberta?  Each vehicle was listed for sale in the Alberta Kijiji on line marketplace in late April 2021, cherry picked by the Red Neck to make a point.  So if you smell a rat, you are correct.  The Tesla is only four years old as this is written, but has managed to rack up an impressive 171,000 kilometers.  The little Civic is also extremely well used, 480,000 km and counting.  The truck on the other hand, has accumulated 82,327 km over 7 years, which for Alberta means it's mostly a lawn ornament.

Comparison  will use the average mileage, or kilometerage per year for each vehicle, so the Tesla's impact will be based on 42,750 km per year,  Honda has been motoring along for 15 years, so 32,000 km PA, the dumb truck could only manage 11,761 diesel burning km a year.

But wait the Tesla is electric, so zero emissions right?  Well no, not exactly.  Batteries need to be charged.  Assuming our Tesla was charged from the Alberta grid, the Tesla is running on 43% coal generated electricity, 49% natural gas electricity and 8% non fossil fuel sources such as hydro, wind and biomass (i.e. pig shit and wood chips) according to Canada's Energy Regulator.  Biomass and biofuels such as ethanol also emit CO2, but they are good CO2s, not evil like fossil fuel CO2s.

According to various internet sources, a Honda Civic with 1.6 liter engine and manual transmission gets 34 miles per US gallon or 6.92 Liter per 100 km, so Civic guzzled 2214.4 liters of gasoline per year.  Our Diesel truck with 6.7 liter Cummins motor comes in somewhere around 15 mpg or 15.7 liter per 100 km, for a total of  1,846.4 liters of diesel fuel. So how does that translate to CO2 emissions?  Glad you asked.  The results from last to first...

So Tesla wins, but only in Alberta.  Tesla comes in first in emissions because its owner couldn't stop driving the effing thing and Alberta electricity is 92% dead dinosaur.  We should all learn from the RAM, which, while being very cool does not spend a lot of time spewing deadly green house gases.  The red neck suspects the majority of RAM kilometers were accumulated before it was tastefully modified into an outstanding example of early twenty first century folk art.  Should hyperactive Tesla and Honda owners follow the lead of custom four wheel drive lifted pick up truck owners, the impact on carbon emission reduction could be enormous. 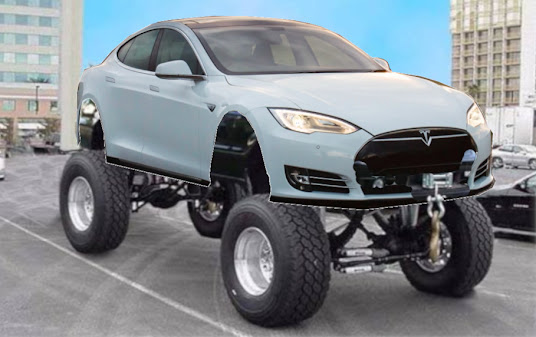 Go ahead, do it for the environment